For my final video, I wanted to do a bit of a reflection because this project was definitely a journey for me. Looking back at when I first brainstormed the idea of making an interactive visual novel game, I’m astounded at what I have done over the course of the semester with a lot of effort and hard work. Using a new program was a struggle as I had to figure out how to use the interface, how to deal with common errors, and how to export it into a web build so everyone can play. Overall, I think this is a great start to venturing outside of my comfort zone with projects.

I used mostly screen recordings because that’s where most of my progress took place and since it took hours to draw and input the text boxes for dialogue/monologue, I felt that was the most fitting. Hearing feedback after crit, I wish I had put a short segment of playthrough with the final product, as well as some comparisons with how this first started out (my artwork).

Living in Kanawaza City as typical college student, life is rather mundane. However, one day while reminiscing about your parents and hometown, you end up wandering into a place called Zero Realm, where nothing from the normal world lives or moves. Frozen in infinite time, death shrouds the strange world infested with monstrous shadows, soul-eaters, and enraged spirits. How did you get there? Will you be able to escape? Or will you be another countless victim to these atrocities? Find out how by playing the demo version of Zero Realm.

Zero Realm is a psychological horror visual novel game in which the player takes on the role of the protagonist and interacts with the important characters in the story. Different choices of dialogue are often given throughout the story to reflect your own feelings, however critical choices are where it puts you on the brink life or death… or even worse, your friends. The critical choices the player makes has the ability to impact the outcome of the storyline. There are good or bad endings depending on selections made. Will you choose what is “morally” right?

I was influenced and inspired by multiple other psychological horror games and novels such as Spirit Hunters: Death Mark (and the sequel NG), Ib, Angels of Death, Higurashi no Naku Koro Ni and Doki Doki Literature Club. Each have their own charms of attributing horror, yet somehow still leave the audience feeling a mix of emotions. I not only aim for the viewer to just enjoy the experience of playing through the visual novel, but to feel the thrill of it; to feel as if you are the actual character within the story.

An interactive psychological horror visual novel game in which the player interacts with other characters and is given choices throughout the story. Depending on the decisions made, it will trigger different endings of the plot.

1 computer to run game (preferably attached to a projector)

Lighting: can be played either in light or in dimmed lighting

Interaction: mouse or trackpad can be used to click on choices

Viewers use the mouse or trackpad to play through a section or the entire demo version of the game.

Installation Sketch-up: Room 156 Lab (if no projection, then regular desktop computer to play from) 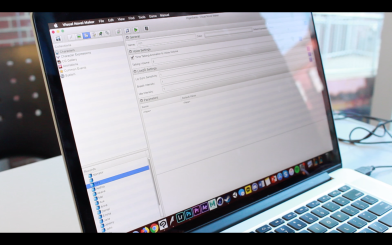 Growing up, I’ve always adored games and digital novels. Player vs player, player vs AI, horror RPG maker games, interactive visual novels and otome games are no strangers to my gaming experiences. I am also interested in character designs and character concepts and how they can affect the storyline and the audience. Because of my past and current love for games and fictional characters, I would like to make a short demo of a visual novel for my senior project. The novel will be text-based, but there will be choices throughout the demo the player can make that will affect how the path of the story will go. Because the player can make choices that will affect story path, I decided to make the novel a psychological horror genre. There’s a lot of wiggle room to make the player make crucial and sometimes cruel decisions that will inevitably decide whether the choices will lead to the good, bad or normal end. I also think that’s the beauty in psychological horror because many of those choices can be applied to real life and make you think, “Would I actually do this?” or “What if this actually happened and I had to make the choice?” The point of my game is to also stimulate the audience and not just be challenged by the game, but also challenge themselves psychologically.

I researched a few visual novel maker engines and found that Ren’py is great for beginners. It has a simple interface and easy-to-understand coding program. I’m also designing a few characters that have multiple sprites and will be doing this through digital art programs. Having different sprites in reaction to certain events, feelings, emotions, mood, or other characters during the storyline adds dimension and dynamic vs. having a static sprite. It also gives the feeling as if you are also talking to the character, especially as the player. Another challenge I am taking on is that I plan to animate their eyes (simple blinking). Unfortunately, Ren’py doesn’t support .GIF files, and I originally intended for the characters to blink and have mouth movements, so I have to code the characters blinking instead. Because I am weak with coding, this will be a great opportunity for me to gain more experience with how coding works in different programs and strengthen one of my weaknesses. I am extremely excited to work on this project and cannot wait for the end result!